Why are Foam Cups Bad for the Environment?

What is something that helps to keep coffee hot and shipped materials safe? Polystyrene foam. However, the material has sparked controversy in recent years for good reason. It has proven to be very useful, but unfortunately, its use comes with complications for our planet and our health.

How Are Foam Cups Made?

Like other plastics, polystyrene is a polymer; a long repeating chain of monomers (small molecules). It is made from hydrocarbons like benzene and ethylene, which require raw materials like natural gas and petroleum.

At the beginning of the manufacturing process, polystyrene starts as small, dense, hard beads. Using heat and steam, these beads are softened and expanded, eventually growing larger and, as a result, less dense. In fact, if you look at a piece of polystyrene foam, you may actually be able to see these beads.

Like other plastics, polystyrene can be heated and molded, shaped, or extruded into a variety of different shapes and sizes. Once cooled, polystyrene has several light, expanded cells, and serves as an excellent insulator and shock absorber. This is a reason why it’s commonly used in disposable food and beverage packaging, coolers, and bicycle helmets.

How Many Foam Coffee Cups are Produced Every Year?

Polystyrene has been around since the 1930s and first made its way into coffee cups around the 1960s, quickly soaring in popularity and usage.

It’s estimated that in the United States, more than three million tons of polystyrene are produced every year. This translates to 25 billion polystyrene cups being thrown away annually.

When compared to other waste products, polystyrene takes first place for being associated with most litter. In fact, the material accounts for 30% of landfill mass globally. In the U.S. alone, roughly 1,369 tons of polystyrene ends up in landfills every single day.

Fortunately, this is changing as some of the largest, most well-known QSRs have begun to phase the material out. In 2018, McDonald's started to ditch polystyrene foam after agreeing to phase it out of sandwich packaging decades earlier in 1990. By 2020, Dunkin Donuts was also free from polystyrene, using paper cups instead.

Polystyrene is a type of plastic, so are foam coffee cups recyclable?

In theory, they most certainly can be recycled. However, the cases in which this actually happens are extremely rare. In fact, we'd be hard-pressed to find a municipal polystyrene recycling center as the recycling process for foam is difficult, inconvenient, and expensive. It's estimated a recycling program could spend about $1,000 to recycle foam and end up with only $200 of materials. Even then, recycled foam can rarely be transformed into something useful though it can be used as a construction material.

The reason polystyrene foam is so difficult to recycle is also partly why it can’t be composted, either. When compared with other plastics, polystyrene is more resistant to photolysis or decomposition as a result of the action of light. A foam coffee cup can take up to 500 years to decompose, leaching harmful chemicals as it does.

Like all plastics, the biggest concern with foam is that it persists in our environment for a very long time. Worse, the composition of foam breaks down into tiny little beads. These individual tiny beads can be mistaken as food and consumed by marine and aquatic species. 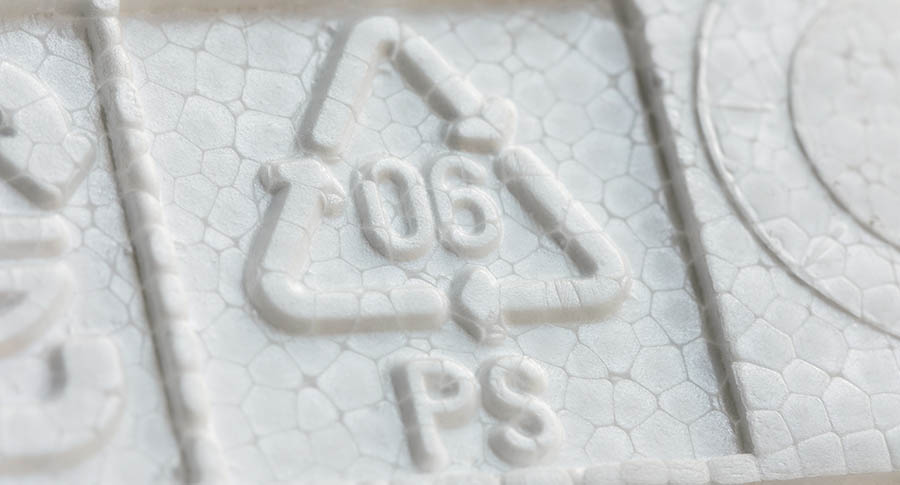 Other Considerations to Make Before Using Foam

When it comes to the debate over foam cups versus paper cups, health is another crucial factor to consider. During the manufacturing process, more than 50 chemical byproducts are released when producing foam products. The most serious of which is styrene, which is considered to be a possible human carcinogen.

This chemical compound isn’t just released during manufacturing. Styrene can also leach out of foam food and drink containers, especially when exposed to heat.

This, along with severe environmental concerns, is why areas around the world have begun banning the commercial use of polystyrene. In the U.S., many states and cities, like California, New York, Vermont, Chicago, Seattle, and Portland, have banned foam. Countries including the Philippines, India, China, Canada, France, and Taiwan have done the same.

Is Polystyrene Foam the Same as Styrofoam?

Polystyrene foam cups are often referred to as Styrofoam™ similar to how facial tissues have become synonymous with Kleenex. Styrofoam™ is the registered trademarked name for a Dow Chemical Company building material product. However, it’s often used when talking about anything made with expanded polystyrene (EPS). This includes items like packing peanuts, egg cartons, foam packaging, building insulation, and disposable coffee cups.

A latte can still be steamy, thanks to insulated hot cups that are certified compostable and use air pockets. Kraft hot cups are made from 100% rapidly renewable sugarcane fiber instead of fossil fuels. This makes them capable of containing liquids up to 220℉ but doesn't require 500+ years for the cup to decompose.

Final Thoughts on the Threats of Polystyrene Foam

Undoubtedly, foam has served several purposes affordably but at a huge cost to the environment.

Fortunately, we now live in an era where keeping coffee hot and our planet healthy is far easier. We can all do our part by switching to alternatives to foam coffee cups.