Why Are Plastic Bags Bad for the Environment?

Plastic shopping bags were introduced in the U.S. in 1965, and they made their way into most check-out lines by 1979. In the relatively short period between then and now, plastic bags have been both enthusiastically embraced and, more recently, banned in many areas around the world. Let’s take a look at this seemingly ubiquitous item and get to the bottom of the question. 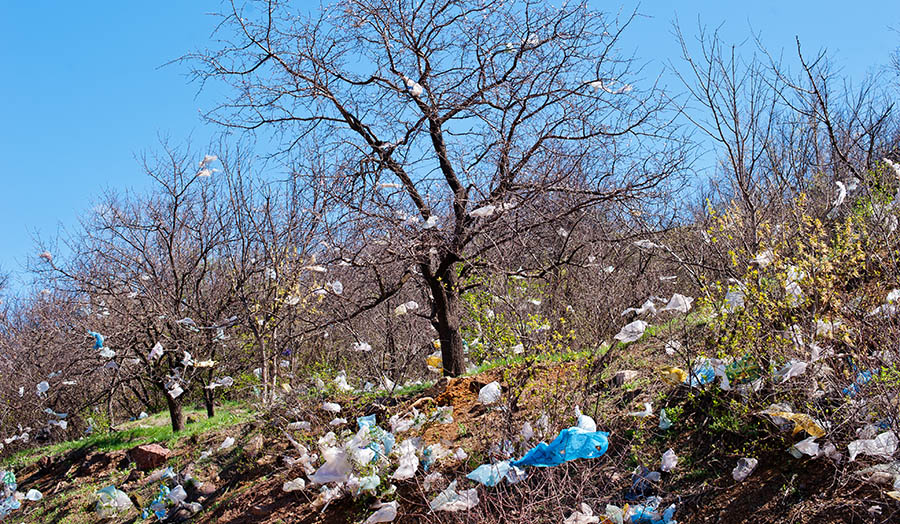 How Many Plastic Bags are Ending Up in Our Landfills, Oceans, Rivers, and Streams Every Year?

On a global scale, we use a shocking 5 trillion plastic bags annually. This equates to a whopping 700 bags for every single person on Earth! Regardless of where they end up, plastic bags cause a range of problems for our planet.

According to the EPA, roughly 3.04 million tons of plastic bags were sent to landfills in 2018. In a landfill, a plastic bag will take roughly 1,000 years to degrade. Undergoing a process called photo-degradation, sunlight will transform the plastic into smaller pieces called microplastics.

These microplastics can persist in our environment indefinitely, and they often end up mistaken as food. Not only does this harm birds and wildlife, but these plastic particles can also end up in the plastic humans consume every week.

While just over 3 million tons were landfilled that year, 4.20 million tons of plastic bags were generated in 2018. This means that over a million tons ended up elsewhere—like in our oceans, rivers, and streams.

Because of their lightweight and buoyant design, it’s easy for land-based plastic bags to blow into waterways. In just the Atlantic Ocean alone, it’s estimated that around 300 million plastic bags end up there every year. Often, they end up accumulating in massive ocean gyres, like the North Atlantic Garbage Patch or the Great Pacific Garbage patch. All of this plastic also harms marine life and the global food web. 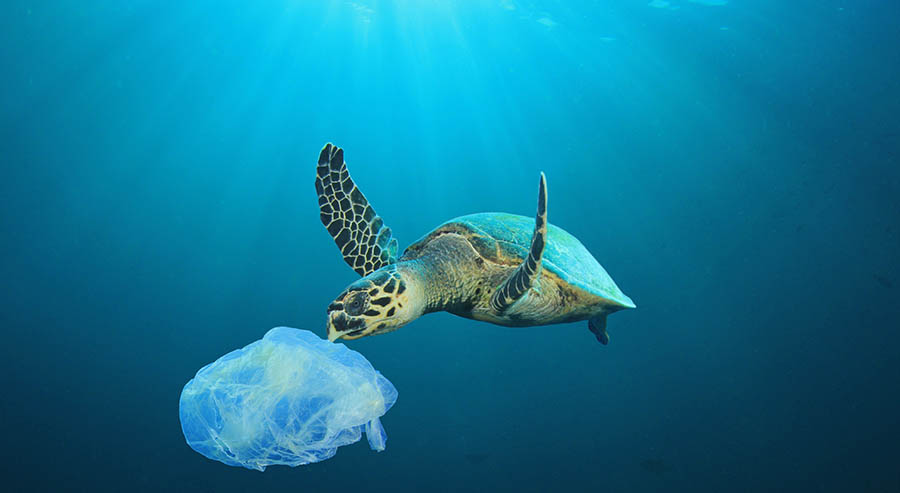 While their disposal is problematic, manufacturing plastic bags has just as big an impact! It’s estimated that an average American uses roughly 10 plastic bags a week, requiring an amount of fossil fuels equivalent to 60 miles of driving! 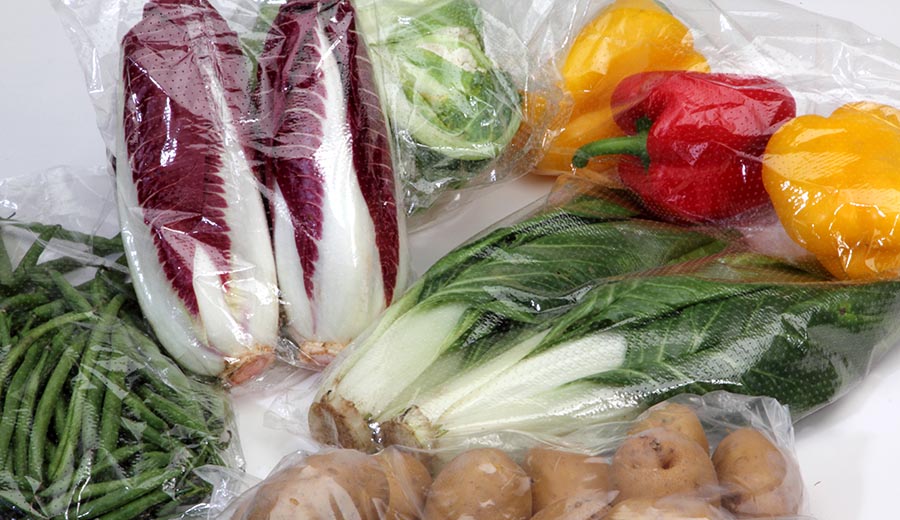 How Are Plastic Bags Made?

Plastic bags, also known as polyethylene retail shopping bags (or simply, polybags) start out as ethane—which is a byproduct of natural gas production. Ethane is a liquid that is transformed in a cracker plant. Here the ethane molecules are heated at extremely high temperatures causing them to crack and become a range of different substances.

One of these includes ethylene gas which—as its name suggests—is a component of polyethylene plastic. The ethylene gas undergoes a polymerization process or a reaction that produces polymer chains (chains of repeating monomers, or single molecules).

Are Plastic Bags Recyclable or Compostable?

As plastic bags are made from two very recognizable types of plastic, it begs the question: are plastic bags recyclable?

While plastic bags are made with types of plastic that can be recycled, they often aren’t. In fact, of all the plastic bags and film that have been generated, it’s estimated that just 9.1% have been recycled.

While plastic bags can get recycled, they often end up tangled in the sorting and processing machinery. This means that they’re almost never accepted for curbside recycling. Not only do plastic bags lead to safety and efficiency issues for recycling facilities, but generally there isn’t a market for this recycled material.

What About Those Collection Bins You See at Stores?

So then, can you recycle plastic bags through the collection bins at stores? Yes, it’s true that many popular stores like Walmart, Target, Kroger, Trader Joe’s, Whole Foods, Safeway, and IKEA have in-store recycling for plastic bags.

They generally accept clean #2 and #4 plastic bags (but sometimes can’t accept black plastic bags). The plastic bags are often sent to recycling centers to be transformed into picnic tables, new plastic bags, outdoor decking, and park benches. Even so, it’s important to consider that this plastic will never “go away” and even these recycling systems can be problematic—especially during a global pandemic.

Considering the problems with plastic bag recycling, the fact they require fossil fuels, and their environmental impact, many have been turning away from single-use plastic bags. Fortunately, eco-friendly alternatives are as durable and convenient without the negative impact. 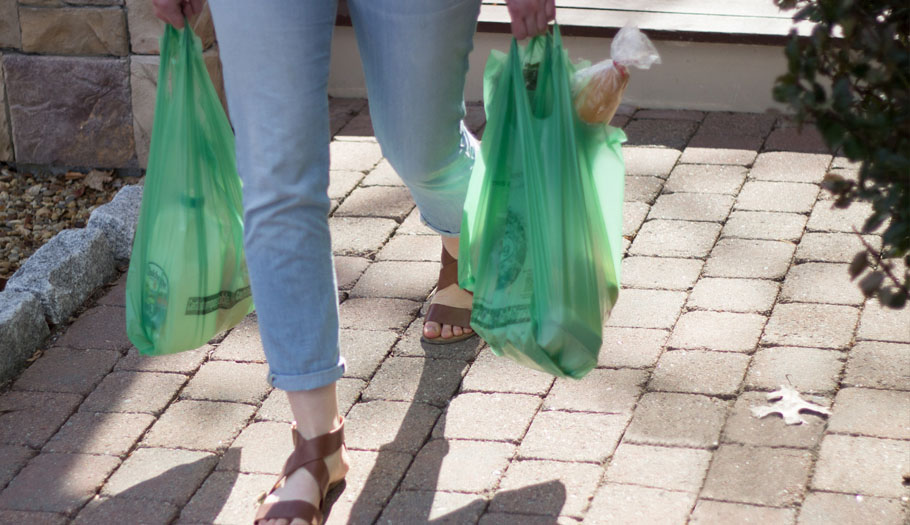 Reusable bags are the most practical and sustainable solution. But sellers typically need to provide options for customers who do not come prepared.

For easy shopping and a bag that can either be reused, recycled, or composted, paper shopping bags are ideal. Especially ones made from recycled paper! Another great alternative is compostable BioBags. They’re made from plant-based bioplastic and water-based inks and can be reused before being composted.

Considering the fossil fuel industry plans to scale up plastic production in the future, now is the time to switch to alternatives to plastic bags. Without drastic action, our waterways will have nearly three times as much plastic flowing into it by 2040. As can be seen in this article, we’re clear on the problem and we have the solutions to make it better.